Last week, Andrei Herasimchuk of Design by Fire announced a contest to see who could take his site’s current design and “clean it up, optimizing it for best semantic and structural architecture.” Having the final code judged by three industry bigwigs (Dave Shea, Dean Jackson, and Eric Meyer), Andrei is offering the winner their choice of any three Adobe products. It’s a widely known fact that software from Adobe is like crack to designers, so I figured I’d have a go at it.

I by no means would consider myself an “expert” on web standards (at least not in the same league as these guys), but my anal-retentive temperament has provided me with the abnormal patience to sit down and scour the web for details regarding this subject matter. I’d like to think that although I may not have a lot of industry experience, I have read tons about web standards and do enough work on my own to offer advice when it’s needed.

The contest consisted of cleaning up three different pages of code, and also optimizing the CSS involved in creating the look of Andrei’s site. Initially underestimating the amount of time it would take to complete this cleanup, I immediately downloaded the necessary source code and began hacking away. 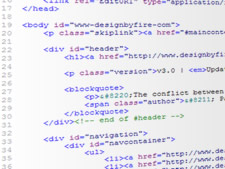 After about four days of working on the contest, creating three new images, having two bloodshot eyes, and one neglected girlfriend, I decided my pseudo redesign was complete. I’m sure it’s not perfect, but I can honestly say that it is better.

Overall, my changes make the site much more consistent…not only in its structure, but in the way it’s displayed across different browsers and platforms. It’s also much more accessible, much more semantic, and it tastes like chicken!

The final judging for the contest has yet to take place, but I’m crossing my fingers. Even if I don’t win the software, it has been a good way for me to flex my design muscles — plus there’s the added bonus of three very prominent designers in the industry who will be looking closely at my work.

If any of my readers are interested in seeing the completed code (yes, I’m talking to both of you), the three pages can be found here:

I’ve also created a zip file that contains all of the new code, images, CSS, and source files used in creating my entry. Inside the zip, you’ll also find a changelog that discusses the improvements I made in more detail.